Well, voting didn’t go to plan. We had two joint winners with 45% of the vote each. So, beings as I don’t get to take part in any Twitter polls I post, I guess I get the deciding vote. So for May, we’ll be reading… WHO FEARS DEATH by Nnedi Okorafor. I know this title probably has more of its roots planted in Fantasy than Sci-fi, but it has been described as “Science Fantasy”, so it dips its toes into SF at least a little. And I wanted us to read a Okorafor book at some point for #ReadWomenSF, so this is a good pick. Also, as it’s going to be made into a HBO series, we’ll be ahead of the game!

Who Fears Death by Nnedi Okorafor 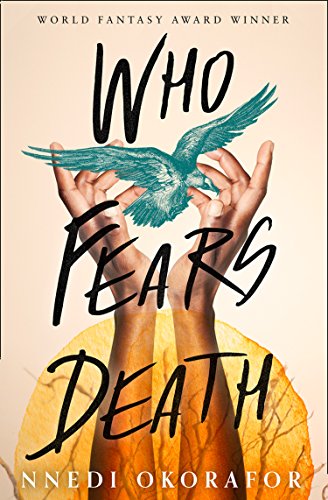 An award-winning literary author enters the world of magical realism with her World Fantasy Award-winning novel of a remarkable woman in post-apocalyptic Africa.

In a post-apocalyptic Africa, the world has changed in many ways; yet in one region genocide between tribes still bloodies the land. A woman who has survived the annihilation of her village and a terrible rape by an enemy general wanders into the desert, hoping to die. Instead, she gives birth to an angry baby girl with hair and skin the colour of sand. Gripped by the certainty that her daughter is different – special – she names her Onyesonwu, which means ‘Who fears death?’ in an ancient language.

It doesn’t take long for Onye to understand that she is physically and socially marked by the circumstances of her conception. She is Ewu – a child of rape who is expected to live a life of violence, a half-breed rejected by her community. But Onye is not the average Ewu. Even as a child, she manifests the beginnings of a remarkable and unique magic. As she grows, so do her abilities, and during an inadvertent visit to the spirit realm, she learns something terrifying: someone powerful is trying to kill her.

Desperate to elude her would-be murderer and to understand her own nature, she embarks on a journey in which she grapples with nature, tradition, history, true love, and the spiritual mysteries of her culture, and ultimately learns why she was given the name she bears: Who Fears Death.

The next #ReadWomenSF Twitter chat will be a little later for May (because I’m in the States and will miss the last Monday of the month deadline). So it will be on Monday 4th June at 8pm (GMT). Stick it in your diaries now before you forget and I forget and we’ll never read anything together ever again *weeps*

Please do add the other two books to your readings lists anyway, because they do sound amazing (Amazon links in titles):

The Stars Are Legion by Kameron Hurley

Somewhere on the outer rim of the universe, a mass of decaying world-ships known as the Legion is travelling in the seams between the stars. For generations, a war for control of the Legion has been waged, with no clear resolution. As worlds continue to die, a desperate plan is put into motion. Zan wakes with no memory, prisoner of a people who say they are her family. She is told she is their salvation – the only person capable of boarding the Mokshi, a world-ship with the power to leave the Legion. But Zan’s new family is not the only one desperate to gain control of the prized ship. Zan must choose sides in a genocidal campaign that will take her from the edges of the Legion’s gravity well to the very belly of the world. Zan will soon learn that she carries the seeds of the Legion’s destruction – and its possible salvation.

Speed of Dark by Elizabeth Moon

Lou is different to ‘normal’ people. He interacts with the world in a way they do not understand. He might not see the things they see, however, but he also sees many things they do not. Lou is autistic.
One of his skills is an ability to find patterns in data: extraordinary, complex, beautiful patterns that not even the most powerful computers can comprehend. The technology company he works for has made considerable sums of money from Lou’s work. But now they want Lou to change – to become ‘normal’ like themselves. And he must face the greatest challenge of his life. To understand the speed of dark.

SPEED OF DARK is a powerful near-future science fiction thriller, the theme of which is both universal and intensely personal. It is dedicated to the author’s own autistic son, and to other parents of autistic children, ‘in the hope that they also find that delight in difference’.

See you on the 4th June.

Find out more about #ReadWomenSF in my original blog post.

And don’t forget you can buy my books DEFENDER and HUNTED here.