For this month’s #ReadWomenSF, the lovely Carol (@JupitersGhost) picked three great books for us to choose from (and I urge you all to add them to your TBR piles). As fate would have it, the author we’ve voted to read for October was on the very panel that inspired this reading group! Very fitting. So we’ll be getting stuck into Gemsigns by Stephanie Saulter over the next four weeks. All blurb information is below, and you can find Amazon links in the titles. Gemsigns is only 99p on Kindle right now, too! So get clicking.

We’ll be meeting on the last Monday of the month for our Twitter chat, so that’ll be at 8pm on Monday 29th October – please stick it in your diaries. 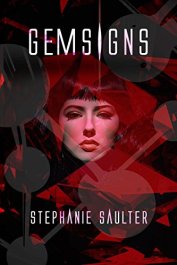 They were created to save humanity. Now they must fight to save themselves.

For years the human race was under attack from a deadly Syndrome, but when a cure was found – in the form of genetically engineered human beings, Gems – the line between survival and ethics was radically altered.

Now the Gems are fighting for their freedom, from the oppression of the companies that created them, and against the Norms who see them as slaves. And a conference at which Dr Eli Walker has been commissioned to present his findings on the Gems is the key to that freedom.

But with the Gemtech companies fighting to keep the Gems enslaved, and the horrifying godgangs determined to rid the earth of these ‘unholy’ creations, the Gems are up against forces that may just be too powerful to oppose.

Two more books worth adding to your reading lists 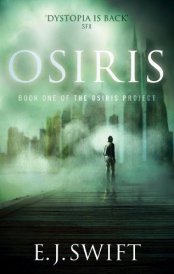 Adelaide Rechnov
Wealthy socialite and granddaughter of the Architect, she spends her time in pointless luxury, rebelling against her family in a series of jaded social extravagances and scandals until her twin brother disappears in mysterious circumstances.

Vikram Bai
He lives in the Western Quarter, home to the poor descendants of storm refugees and effectively quarantined from the wealthy elite. His people live with cold and starvation, but the coming brutal winter promises civil unrest, and a return to the riots of previous years.

As tensions rise in the city, can Adelaide and Vikram bridge the divide at the heart of Osiris before conspiracies bring them to the edge of disaster?

Empire of Dust by Jacey Bedford (Please note, I can’t seem to find an ebook version of this title.)

To combat manipulative megacorporations with telepathic technology, two heroes must rebel, overthrowing the enemy’s oppressive influence in the first book in this exciting sci-fi adventure

Mega corporations, more powerful than any one planetary government, use their agents to race each other for resources across the galaxy. The agents, or psi-techs, are implanted with telepath technology. The psi-techs are bound to the mega-corps — that is, if they want to retain their sanity.

Cara Carlinni is an impossible thing – a runaway psi-tech. She knows Alphacorp can find its implant-augmented telepaths, anywhere, anytime, mind-to-mind. So even though it’s driving her half-crazy, she’s powered down and has been surviving on tranqs and willpower. So far, so good. It’s been almost a year, and her mind is still her own.

She’s on the run from Ari van Blaiden, a powerful executive, after discovering massive corruption in Alphacorp. Cara barely escapes his forces, yet again, on a backwater planet, and gets out just in time due to the help of straight-laced Ben Benjamin, a psi-tech Navigator for Alphacorp’s biggest company rival.

Cara and Ben struggle to survive a star-spanning manhunt, black-ops raids, and fleets of resource-hungry raiders. Betrayal follows betrayal, and friends become enemies. Suddenly the most important skill is knowing whom to trust.