To commemorate the ending of series 1 of the ThankBookFor podcasts, I wanted to do a round-up of my Top Six Favourite Moments. But first, let me just give you the spiel. ThankBookFor is an initiative that celebrates all things story-related, namely through reading, books, and creating and sharing stories. The easiest and most time efficient way we’ve found to do this (so far) is through the medium of podcasts. There are several reasons for this: we need only 1 dictaphone, 1-2 hosts, plus a guest, and a software package that lets us edit the recording (in this case, Audacity, which is free). We’ve recorded 16 podcasts to date, and I’ve co-hosted 12 of them. You can find them all at ThankBookFor.com and you should go find them. Because they’re a lot of fun and they’ve made me add at least 15 new books to my TBR pile, which is what bookish podcasts are for, right? To share the love of stories and, in the process, encourage and inspire others to enjoy and love them, too.

So, without further ado, here are my Top Six Favourite ThankBookFor Podcast Moments.

This occurred during Gilly McAllister’s podcast. And let me be up front, the thing that cracked us up wasn’t even that funny; Gilly had managed to mispronounce a title of a book by Curtis Sittenfeld and that was it. Complete and utter meltdown – you can still hear part of it in the podcast. What you can’t hear is this transcript:

Me: (speaking through my own laughter) You’re gonna have to get out of the room, Cath. Seriously.

Me: Seriously. Get out.

She wasn’t allowed in the room during that entire bit of the podcast discussion; it’s just me and Gilly, and Cath standing at the door, peering in at us through the glass and trying to stifle her giggles.

This was my mistake and I hold my hands up to it. Sometimes (who am I kidding? A lot of the time) my mouth engages before my brain. It was my first Skype podcast interview, and for anyone who knows me, I’m really not comfortable taking phone calls, and Skype is barely one rung up from that. I’m more a face-to-face kind of person. Anyway, the Skype video decided to freeze on our guest, Phoebe Morgan, and morph her face into a new and wondrous lumpy mess. What I actually wanted to call her was Rocky from the film Mask, but I couldn’t remember Eric Stoltz’s character’s name. So I went with Elephant Man. Because that’s loads better. I still apologise for it every now and then when I speak to her. Or offer to crochet her a John Merrick plush for Christmas.

(Disclaimer: Phoebe is actually very beautiful IRL and doesn’t resemble John Merrick at all. Even though I think he’s cute, especially in crochet form.)

I’m not even surprised this happened. If you put me in a room full of books, I’m gonna be carrying some of them out with me when I leave. This is just what happens. So when Tom and I went to Southcart Books for our first independent bookshop podcast, my eyes lit up like bright saucers as I gazed at all the lovely stock. I entered with thirty quid, and left with some fluff in my pocket and a pile of new books to read. It was amazing.

To a couple of people, I used to go by the nickname Jimi, because I told them I could play guitar as well as Jimi Hendrix. Which I could! …at Rock Band on the PlayStation. I’d somehow conveniently forget to add this second bit of information to the conversation. So, in an attempt to realise my dream, and to live up to the little white lie I was telling, I bought a cheap ukulele. And I can play it! Sort of. Armed with my new musical talents, I told Tom I’d be happy to have a go at doing the ThankBookFor jingle if he wanted. So I played one for him. And he wet himself laughing . You know that bit in the Father Ted Eurovision episode where an angry Ted is shouting at Dougal to play the f**king note he just f**king played ten f**king seconds ago? It was like that but in reverse.

Tom: Maybe, you know, play that bit you did just now, before it went all weird, can you do that again?

Me: Which bit? Which f**king bit, Tom? I can’t just recreate it. I was jamming.

Tom: Just, that, you know, right before it went all…different – there was that bit that sounded kind of okay?

Me: Tom, it doesn’t work that way. (Tries to play it again but it sounds CRAP.)

He then went straight to our mate Dave (a real guitarist) and asked him to record the theme tune instead. Which is what you hear at the start and end of each of our podcasts! Maybe on a special occasion (our 50th podcast maybe), my ukulele rendition will finally be released to the world.

This was a very special moment for me. We have a question in our standard list which asks ‘What book would you recommend that no one else has ever heard of?’. The lovely Steve Aryan, Fantasy author with Orbit, smiled ebulliently and began to describe a book, and my little heart blew up like a balloon ready to burst. Because, friends, I knew which book he was talking about. The Reapers are the Angels by Alden Bell. Tom had read it, too. I lost my cool for a moment and my hand rose from the table in slow motion, lifting, palm opening to Tom. He slid me a confused smile , but I’d already committed, this had to be done – there was no going back. I made him high-five me. Am I embarrassed about that? NO. Because I never thought we’d come across a book that both of us had read in answer to this question. The moment will be etched into my memory for all time.

We asked Mike Gayle to appear on one of our podcasts and much to our shock he actually agreed. Thus ensued a whole slew of emails pinging back and forth, trying to find dates and locations that worked for all involved. It took a while. Then, when we had finally agreed to a venue and time, and we were on our way, driving to Quinton Library, disaster struck in the form of projectile vomiting. Luckily it wasn’t me or Tom doing the upchucking because, in a car, I imagine that would be quite traumatic. It was still traumatic for me because it involved PHONE CALLS. Phone calls on speaker phone, pulling over and more phone calls at the side of the road, another phone call once we’d set off again, going back the way we’d come. It was like something out of a movie where the president’s life had been threatened and action plans had been activated. Anyhow, it’ll be a good story to tell Hannah when she’s older “Best-selling author Mike Gayle got cancelled because you threw up the entire contents of your stomach. Well played.” 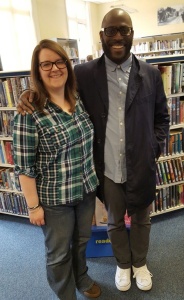 And on that lovely note, the season 1’s finale, Mike Gayle’s ThankBookFor podcast, will be released for your ears’ delectation this Tuesday 24th May. You can find it (and all the other podcasts I’ve been writing about in today’s blog) by going to the website ThankBookFor.com and clicking on the links. If anyone is interested in being a guest on one of our podcasts (series 2 is mostly booked up, but there are spaces left for series 3), please do get in touch via the website or through our Twitter account @ThankBookFor or through its founder Tom Bissell at thankbookforTom@gmail.com (or find him at @TBFTomB).

(Honourable mention: getting to meet Liz Tipping’s beautiful beagle Mary. I wanted to eat her up she was so cute.)