It’s December, which means, for the first time ever, my book is available across the UK to buy and read. It’s kind of a pre-release release, and guess what? It’s arrived in time for Christmas shopping! Wondering what to get Grandpa Joe? Get him DEFENDER, a rip-roaring adventure of daring-do and gung-ho action! Oh, what to get little Billy – he said he wanted the LEGO Millennium Falcon – well, save yourself £200 and get little Billy DEFENDER*, the tale of a young whippersnapper called Lacey who likes riding on motorbikes and seeing the world! Nana Edith? DEFENDER! A heartfelt story of finding your family against all the odds! You see where I’m going with this…

This pre-release edition of DEFENDER is being supplied from Goldsboro Books and is a limited edition run of only 700 copies. It’s signed and dated by me (by the time I got to the 500th book I could barely remember what my name was, never mind the sequential numbering of our date system – but I prevailed! Every book is signed perfectly because I practised my signature for approximately three hours the day before), and it has BLACK SPRAYED EDGES. Now, I can’t tell you how cool these look. They really do need to be seen in person – which means either buying the book or popping round my house to have a gander yourself. As I’m not yet willing to reveal my secret lair’s address, that just leaves the option of buying the book. Sorry. Now, you won’t be seeing this book with black sprayed edges ever again. Anywhere. Unless you get the black markers out. Once those 700 copies are gone, they’re gone. The official edition being released on January 12th is back to plain old white pages. However, the front cover remains cool as fuck, so don’t worry about that. 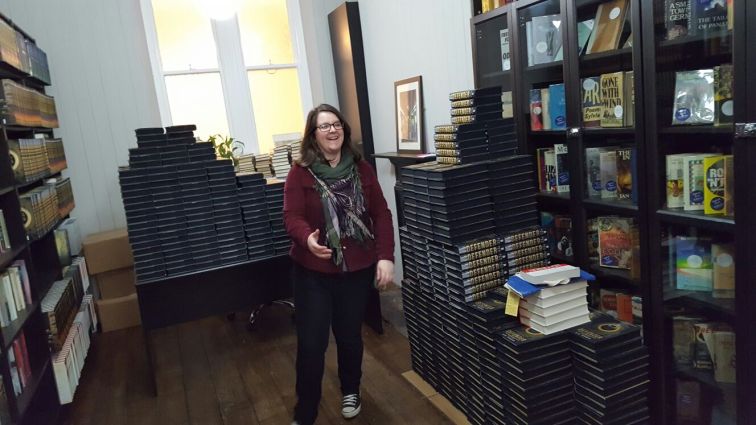 ANYWHO. Goldsboro. I was there this past Tuesday (29th November 2016) and the fine folk there gave me a swivelly chair (dangerous), a cup of coffee (imperative) and a nice desk to sign all those copies at. I had a lovely chat to Holly and Caitlin about our favourite reads and authors. It was a tad cold in there, I’m not going to lie, but if it had been warm, I’d have probably been autographing the books PC Plod within thirty minutes, so maybe the temperature was a deliberate thing. Who knows. I had a great time, and only got wrist cramp once, which I thought was good going. My bum was also gracing the same place Lee Child’s had the week before, so I was pretty happy all round. What’s even better than all that is finally being able to share my book with you, the reading public; something I’ve been waiting to do for sooooo long now. It’s all very exciting. I’ve had some pictures of the window display through, but I really can’t wait to see some photos of DEFENDER in the hands of readers. Here are some pics to keep you guys going in the interim. And thanks for reading. 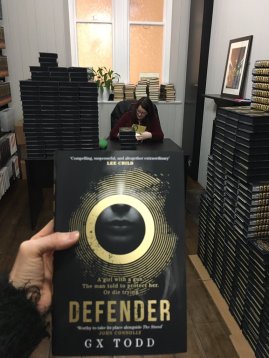 Have you ordered a special Goldsboro Edition of DEFENDER? Please tweet me a picture to @gemtodd when it arrives – I’d love to see and share it!

*Books aren’t age restricted, but I would say DEFENDER isn’t suitable for young readers. Full disclaimer: there’s swearing and fairly graphic descriptions of violence. If I had to rate it, I’d go with a 14+ age rating.